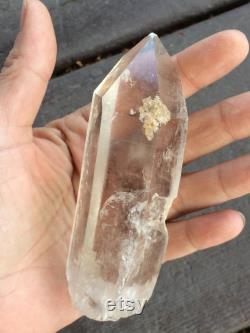 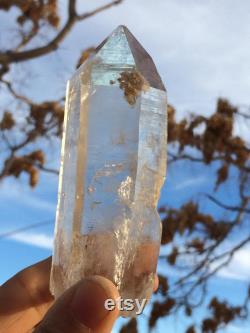 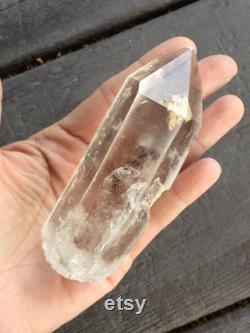 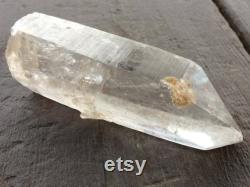 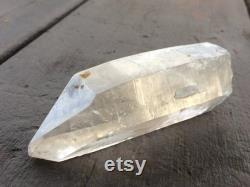 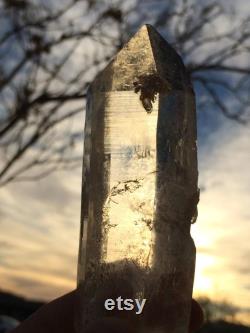 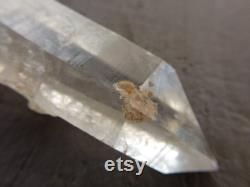 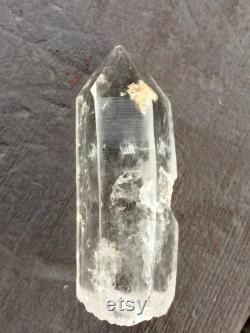 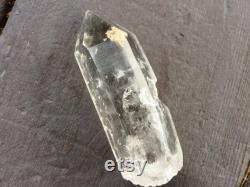 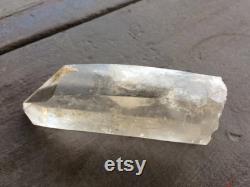 The main front facet is deceptively triangular in shape (but has four sides), with two four-sided "window" facets on the opposite side. There is no back facet; the crystal is flat on the back side with horizontal striations - - a common trait among lemurian seed crystals.

These horizontal striations are said to carry the message of the ancient lemurians who "seeded" these crystals with their knowledge. At the base of the main point there is a small inclusion, breathtaking on it's own- however, the inclusion also contains what appears to be an additional double-terminated crystal growing in/out of the main point, indicating this is an "inner child" crystal. Additional crystal growths are found toward the middle of the crystal, as well as key structures and surface etchings. Inside the crystal there are nice streaks of frost and mirror, as well as some dramatic mineral inclusions.

The very tip of the point is slightly chipped - these types of crystals are sometimes called "warrior crystals" and are used for strength in tough or trying times. Fits neatly in your hand or pocket, ideal for meditation, reiki, chakra balancing, healing or energy work. This is a naturally occurring crystal, not cut or polished. See photos for size reference. This listing is for the exact item as pictured above. Who is it for possible uses. Rock lovers and rockhounds, rock collectors, geologists, anyone who loves beautiful things created by nature, new age, metaphysical, holistic healers, bodyworkers, energy workers, crystal healing, chakra healing, meditation, reiki, wiccans, pagans, psychics, tarot readers, enlightened souls, magick, rituals and ceremonies, altars, medicine wheels, mantle pieces, paper weights, desk decor, and anything else your imagination can dream up.

These stones typically look larger in pictures than they are in real life. When possible, i try to include a coin, ruler or other object of reference in the photo, but please refer to the measurements included in the description for actual size.

Please treat gemstones with care; all carved gemstones can be fragile, especially if subjected to extreme temperatures, and could crack or break if hit against a hard surface. To cleanse the energy of this and all semi-precious gemstones and crystals, soak in water from a natural source that has sea salt dissolved in it, and/or smudge your stone with the smoke of white sage or desert sage. Quartz, also known as rock crystal, is one of earth's most common minerals. Scientifically, quartz is a silicon dioxide that posesses "piezo-electric" properties. That is, when subjected to heat or pressure (such as holding it in your hand), it converts physical energy into electrical energy, or vice-versa.

The polarity of the crystal will also change - the point, normally positively charged and receiving energy, will become negatively charged and emit energy. Because of these properties, quartz crystals are able to store, regulate, release and amplify energy.

You can try this out by holding a crystal in your hand for a few minutes, or meditating with the crystal as a focal point, and see how warm it gets. Quartz has been used for centuries in numerous cultures for healing, energizing, protection, enlightenment and communication with the great spirit. Ancients thought it to be solidified water, and so used it in ceremonies involving water and rain. For native americans, it was symbolic of spirit and treated with respect. Crystals have been found on native american ceremonial wands in southern california.

Contemporary wiccans often wear quartz crystals with silver during ritual, as both materials have associations with the goddess. Please check out my etsy shop to see what else i've got in stock. I have lots of beautiful gemstones, mineral specimens and crystals, including large quartz wand crystals and teeny tiny quartz crystal jewelry points. I also make sterling silver and gemstone wire-wrapped jewelry, if you're looking for something more elegant and upscale. This item is made of quartz and quartz crystal, rock crystal, crystal, reiki crystal, chakra crystal, reiki stone, chakra stone, natural stone, healing stone, clear quartz crystal, lemurian quartz, brazil quartz.