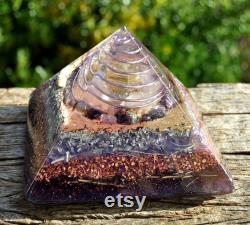 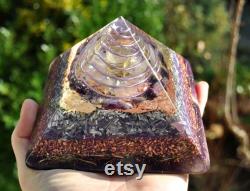 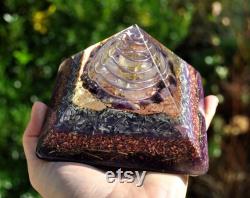 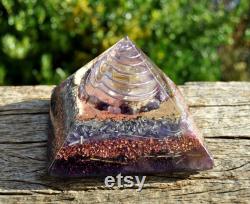 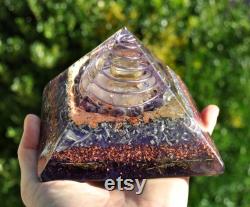 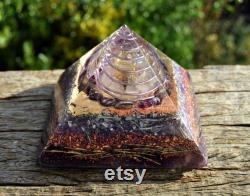 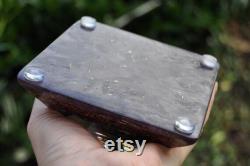 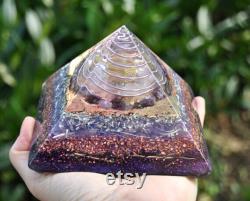 This is a special orgonite giza pyramid that features the golden triangle stones which are amethyst, rose quartz and clear quartz. It has a natural terminated clear quartz crystal in the middle which is entwined with a etal sbb coil which amplifies, moves and directs energy. The coil also considerably increases the power and range of the pyramid. It has one stainless steel ball in the top which makes the energy come out in a rounder wider shape instead of a beam. In the top you can see raw amethyst crystals, rose quartz and clear quartz crystals surrounded by copper and gold leaf gold.

It consists of densely layered metal shavings of aluminium, bronze, (lots of) copper and brass which is required to for the orgonite to properly work according to wilhelm reich's research (the more metal shavings, the better the orgonite can remove stagnant energy). Within these metal layers there are four terminated quartz crystals pointing in four directions for extended energy flow in all four directions and for piezo electric effect. It is made out of durable non toxic resin (not epoxy because this does not shrink much) to ensure optimal shrinkage and pressure on the quartz to create the most piezo electric effect. It consists of the following main stones.

It is arguably the most important stone in gemstone therapy. Rock crystal strengthens the self-healing capacity. It also enhances the effect of other stones.

He dissolves energetic blockages in the chakras. It optimizes the energy flow. Meditating with rock crystal helps to develop your intuition and third eye. It purifies your aura and makes it more powerful. Rock crystal brings balance between body and mind.

A great stone to meditate with, to wear or to energetically cleanse a space. Rock crystal gives energy and can give you clear insights.

He belongs to the heart chakra and makes loving and pure. Rose quartz'loving and soft'. Love for ourselves and for others becomes easier to feel and give by rose quartz. He opens your heart chakra and that opens you to beauty, love and increases your empathy. He teaches you to love yourself again if you may have lost it after, for example, a traumatic experience such as mental or physical abuse.

Rose quartz also helps against fears and phobias. For creatives, rose quartz is a very nice stone to have with you. He will inspire and help you to create new things out of love.

Amethyst'balance and spiritual peace'. Amethyst gives peace, depth and harmony in the house if you put a beautiful stone in the living room. It will neutralize negative tensions and energies and keep your living space energetically clean. Amethyst belongs to the seventh chakra.

The color gives clarity of mind and is relaxing in general. He stimulates and helps you in your spiritual growth and develops your intuition.

Helps you find the silence within yourself. Amethyst reduces nervousness and stress and helps improve concentration. Calms strong emotions and brings stability. The pyramid further has a base mix within the layers in the bottom consisting of. Said to be around 2 billion years old, shungite is a very powerful, ancient healing stone that detoxifies your body by absorbing and eliminating any negative or health hazardous energies. Elite shungite, also called silver shungite, contains around 98% of organic carbon, making it the most beneficial and rarest forms of shungite. Elite shungite is beneficial for emf protection, purification of the body, general healing and well-being and much more. Shungite is a special pure carbon from the region of carelia in russia.

This charcoal looking mineral has lately become known all over the world because of its amazing healing properties. It is the best grounding mineral of the planet.

This amazing mineral is also highly effective to absorb radioactivity and emf radiation. Its powder is used by the russian army, to create emf protective coatings and paints for buildings and aircraft. Today it is used worldwide by geobiologists to balance geopathy and dissipate emotional energy as well.

Black tourmaline - protection and grounds excess energy. Black tourmaline is associated with the root or base chakra, and is excellent for grounding excess energy. It is a well known as a purifying stone that deflects and transforms negative energy, and thus is very protective. It can transform and remove negativity from an individual or an environment.

It is often used as an aura cleanser, and can help one attain higher levels of awareness. Black tourmaline has also been used to deflect emf radiation energy from tvs, computer monitors and other emf sources. They also have a profound effect on clearing the heart, and working on the solar plexus, to provide empowerment and manifestation of will. With their amplifying effect, they can greatly assist with helping one to manifest their intents in the physical realm.

Rhodizites also elevate mood by bringing high frequency energy into the emotional body, creating a sense of bliss, joy, and upliftment. They create a purification process that helps to put the body in harmony and balance, and also clear the path for lightbody integration. Pyrite - to enhance and deflect elf (extremely low frequencies) waves. It's sunny golden color associates it with the sun, and with fortification and strengthening of the mind. The name comes from the greek word meaning "a stone which strikes fire".

Iron pyrite makes a wonderful energy shield, blocking out negativity from various sources. Selenite - to clean and charge. A wonderful property of selenite is that it has the power to cleanse and clear other crystals and negative energies so you never have to (re) charge your crystals. Selenite crystals are remarkably peaceful.

They carry a very high vibration, and instill clarity of mind and a deep sense of inner peace. Selenite will assist you in opening your crown chakra and it can even assist you in contacting your spiritual guides and angels. This pyramid consist primarily of concentrated organic matter in the form of resin; inorganic matter in the form of metals; and conductors in the form of one clear ore more clear quartz crystals. The organic resin exerts negative ionic charges and the inorganic metals exert positive ionic charges. When housed in such close formation, the excitation of these ionic charges act as magnetic energy generators (orgone) - drawing in subtle energies from the environment. In combination with clear quartz crystal(s) and other semi-precious stones, these magnetic energy generator devices continuously transmute (on a quantum level and in elegant scalar resonance) lower incoherent energy drawn in from the environment into higher coherent frequencies inherent in the crystalline signatures of the stones. These higher frequencies are continuously generated, transmitting vibrations of harmony & balance out into the environment and into one's energy fields. Orgonite is a substance made of resin, metals and quartz that strengthens your body's energy field, helping to protect you from man-made emf radiation and negative energy.

These amazing metaphysical tools can help improve your life physically, emotionally and spiritually. I have his written permission to use the term orgonite and orgone generator. Orgone is simply another word for what is also known as qi, prana, ether and akasha. It is a universal life-force energy which permeates all matter on earth.

Orgone can exist in a positive, healthy form, as well as a stagnant, harmful form, often caused by modern technologies that emit emf radiation. The side-effects of being surrounded by stagnant orgone energy include depression, anxiety, sleep problems, allergies, and other physical and mental health issues. Dr wilhelm reich, an austrian psychiatrist, researched orgone energy in the earlier half of the 20th century. He found that organic materials attracted and held orgone energy, while non-organic metal materials attracted and rapidly repelled orgone energy.

Today's orgone devices are built on these two principles. As a mix of organic resin and inorganic metal shavings, they simultaneously attract and repel stagnant orgone energy, producing a scrubbing effect which re-charges the stagnant energy. Orgone devices also includes an encased quartz crystal which has a piezoelectric effect (it produces a small electric charge when put under pressure). This adds to the energy-cleansing effect.

This pryamid is created with loving intent to transform people's lives for the better in a loving environment. It has been hand sanded through 9 sets of fine polishing paper so it is shiney and silky smooth. Because it is a one of a kind hand-crafted one, it may have slight artistic imperfections. Weight is 792 grams / 27.93 ounces. It has the same proportions as the original giza pyramid in cheops egypt.