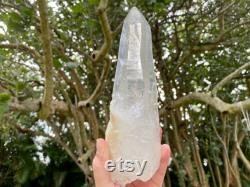 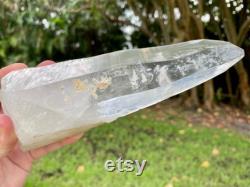 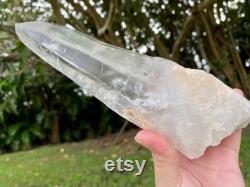 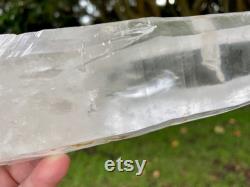 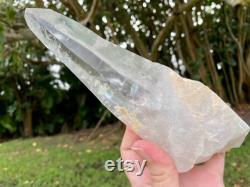 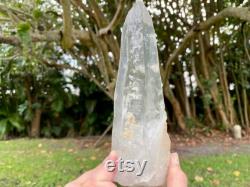 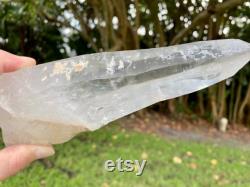 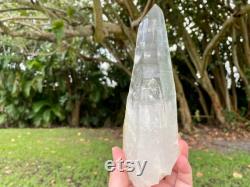 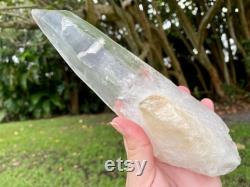 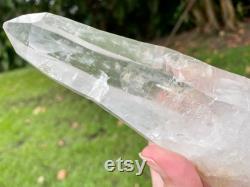 This gorgeous brazilian lemurian crystal with rainbows weighs 710 grams or 1 pound 9 oz and is 7.5 inches long. Lemurian crystals, sometimes referred to as lemurian master seed crystals, or lemurian master healing crystals, are marvelous quartz that are thought to have been left on earth by the lemurians. All this might seem a bit strange to those not familiar with lemuria. Like the more well known continent of atlantis, lemuria is a legendary lost continent, but much older than the atlantis.

Lemuria was located somewhere between the pacific and indian oceans. This large continent existed until about 100,000 years ago. Lemuria is thought to have been the earliest human civilization on earth. It is believed that this continent disappeared as a consequence of volcanic eruptions, earthquakes and rapid tectonic plate movement. It did not disappear suddenly; it took thousands of years for it to be swallowed by the sea. The lemurians were a wise civilization, whose level of connection to the divine, modern humans have not reached yet. Their dna was highly efficient, so efficient that lemurians had very long lifespans; they lived for more than 500 years. Their highly efficient dna allowed their bodies to heal and repair damaged tissue very easily.

Their bodies regenerative capabilities are incomprehensible by modern science; for instance, they could regrow a limb if it were severed, not unlike the way a lizard regrows a severed tail. The lemurians considered themselves part of everything that is; they thought everything on earth was alive and that they were an intrinsic part of earth, as earth was part of them.

They moved from the different land masses and to the islands that resulted from the split of their original land. Some people believe that they even traveled to the land of atlantis and other regions of the planet. These crystals were programmed by the lemurians and left here on earth as tools to access earth's crystal grid's information, a type of historic record of humanity on earth. These crystals are a sort of lemurian time capsule that only became available to humans when the time was right. Modern humans have only become aware of lemurian crystals recently, starting in the last decade of the twentieth century.

We can access the lemurians' wisdom with the help of lemurian crystals. One can hold a quartz crystal in one hand and but their thumb on the lemurian crystal's striations and feel the connection to that powerful portal of energy. Upon doing this, you will feel very cold or very hot.

Even if a person does not believe in things beyond their perception, they will notice the powerful and beautiful energy of a lemurian quartz once they hold it in their hands and try to meditate while holding it. This item is made of extra large brazilian lemurian crystal and healing crystal, meditation crystal, reiki crystal, crystal decor, metaphysical crystal, home decor.