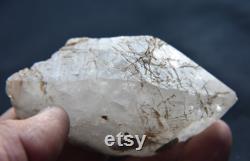 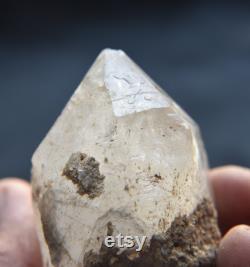 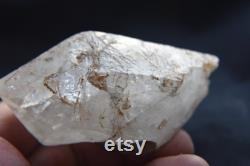 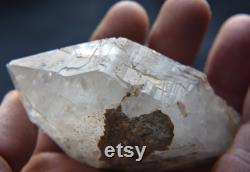 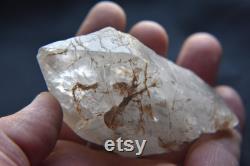 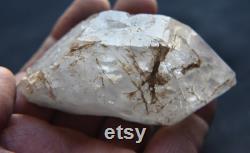 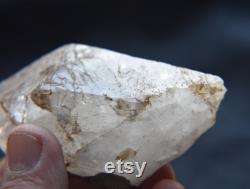 The crystal can be used to enhance, amplify, and intensify transformation, releasing self-limitation, disease and disorders. Himalayan quartz crystals gather, hold and release a very high energy with a powerful "om" vibration. It is also an enhancer and activator of other crystals.

It is believed that they have the ability to receive and transmit energy from both ends and are used for alignment, patience, perseverance, protection, dreams and astral projection. Double terminated crystals strengthen energy flow, and create an energy vortex that can clear all unwanted energy, changing negative into positive energy. Considered one of the "master crystals", lemurian quartz crystals teach oneness, reminding us that while we are all individuals, we are also connected to each other, and that we are all equal in spirit. Lemurian quartz crystals help us maintain our connection to spirit, aiding spiritual evolution, and have been used successfully in dream work.

Also called lemurian seed crystals or "lemurian star seeds", lemurian quartz crystals were originally found in brazil. Metaphysical legend states that there was once an advanced ancient civilization called lemuria, similar to atlantis but more spiritually developed and peaceful. As the end of their time on earth was coming to an end, the lemurians programmed these crystals to teach their messages of oneness and healing - messages that would be revealed when the energy on earth was ready to receive them.

The lemurians then planted (or seeded) the lemurian crystals, encoded with their ancient knowledge and wisdom, to be found centuries later by us. The legend continues to state that lemurian seed crystals are planted in a grid pattern over the surface of the earth and beyond, to other stars and dimensions. When you connect to a lemurian crystal and the energy it contains, you are also connecting to this grid of associated energies from the earth, the stars, and beyond.

Starbrary quartz crystals can be recognised by naturally occurring markings and etchings on the faces of the crystals that resemble ancient symbols. Many quartz crystals and minerals show etchings and markings however the energy and detail of a starbrary crystal is completely different and unique. They appear as lines, geometric shapes, linear patterns, protruding triangles, circles and dots. These glyphs symbols are doorways or portals which are encoded with records of information from other star systems. Starbrary quartz crystals are essentially galactic libraries.

If you are called to work with a starbrary quartz crystal it has come to you for a reason and likely has information about your cosmic origins and your mission here on earth in this timeline. You can unlock this information through meditation, holding the crystal, gazing at the markings and working with the crystal to open channels to higher consciousness. The language of the starbrary is similar to that of lemurian seed crystals, but more complex due to the incredible amount of information each one contains.

This information is considered crucial to the growth and survival of the human race and the evolution of the planet as a whole. They are also thought to contain information required to help the earth at a time of extreme global need or crisis.

It follows, therefore, that these amazing and significant crystals are beginning to become available in various parts of the world, so that their reach to lightworkers will be on a global scale. This item is made of quartz crystal and himalayan, earth, sun, lemurian, starbrary, pyrite.