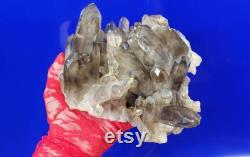 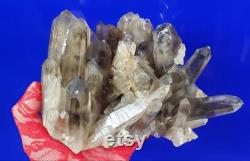 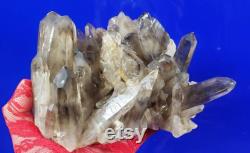 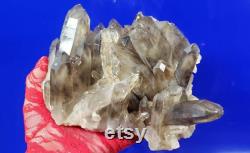 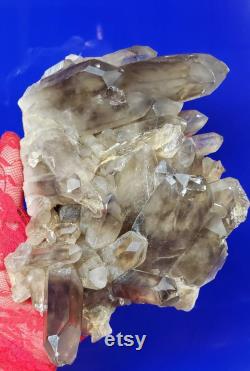 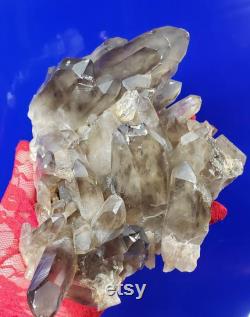 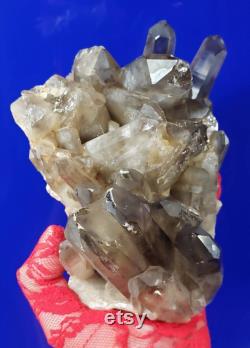 A beautiful large natural piece of brazilian smoky quartz. A truly unique, stunning and one of a kind piece. Exceptional natural smoky quartz cluster with various shades of light colored pale smoky hues along with some that have graduating light root bear colored crystal points. It looks like a city filled with spectacular crystal skyscrapers. The crystals have grown in all different directions.

Some have grown side by side, are leaning up against each other and piggy backed onto each other. One of the crystal faces has a straight diamond shaped window on one of the terminations that keeps showing up prominently in a few of my photos. Window quartz crystals are master assistants for people wishing to delve deeper into clairvoyance, scrying, seeing, psychic readings and divination in general. Window quartz specimens are quite rare, and not generally easy to come across. The crystal cluster measures approximately 7 1/4 inches across at the widest point by approximately 5 1/2 inches high at the highest point by approximately 4 1/2 inches deep at the deepest point. Weighing just under 4 pounds, it weighs 3 pounds 10 ounces. There are some broken points which is normal to be expected natural faults, but all in all it is a beautiful display specimen. Smoky quartz relives fear, lifts depression and brings emotional calmness, it alleviates suicidal tendencies and ambivalence about being in incarnation, smoky quartz aids acceptance of the physical body and the sexual nature, enhancing virility and cleansing the base chakra so that passion can flow naturally. This crystal alleviates nightmares and manifests your dreams.

When it comes in contact with negative emotions, it gently dissolves them. Smoky quartz promotes positive, pragmatic thought and can be used in scrying to give clear insight and to neutralize fear of failure it dissolves contradictions, promotes concentration and alleviates communication difficulties. Smoky quartz facilitates moving between alpha and beta states of mind and aids clearing the mind for meditation. Smoky quartz is a powerful grounding aid to be used during spiritual meditation. It can help one come back to the physical body and world after working in higher realms.

Using smoky quartz during meditation allows one to reach a higher state of consciousness, relieving the barriers from alpha and beta states of mind and helping to cease any mental chatter consuming one's consciousness. It is a talisman for the root chakra, which is an anchor to the natural world, again making it a premier stone for meditation. Smoky quartz facilitates grounding of spiritual information to help one understand, receive, and integrate messages received during deep meditation. Having the ability to transform and remove negative energy, smoky quartz also protects and cleanses the aura. While wearing smoky quartz, it provides a protective barrier against negative energies in one's environment.

It absorbs and transmutes an unlimited amount of negativity by grounding it within the earth to be neutralized naturally. Smoky quartz allows one to see and accept the joys in life and frees them from illusion.

Use smoky quartz to ward off negative thinking. Smoky quartz has a deep connection to the mother earth and her energies. It initiates movement of the primal forces within the physical body, activating our survival instincts in a purified way. It brings strength and stability as well as a sense of personal pride while walking the earth.

Smoky quartz links the earth and stimulates concern for the environment. Use smoky quartz to block geopathic stress and to diffuse electromagnetic smog. Smokies combine the highly tuned properties of quartz with the grounding energies provided by their dark color.

It draws the ethereal into manifestation which can be useful when bringing dreams and aspirations into reality. While wearing smoky quartz, you are more likely to experience phenomenon such as ghosts, ufos, fairies and spirit guides. Smoky quartz has had multi functional uses throughout history. Its earliest recorded use was for sunglass lenses in twelfth century china. Smoky quartz is the national gemstone of scotland which holds the longest historical association with the stone. It was used in kilt pins and in weapons, more specifically as decorations for the scottish dirk, and the shorter sgian dubh' meaning hidden knife because it is usually kept concealed in one's sock. In the ancient world, smoky quartz along with other quartz crystals, were used by romans to carve intaglio seals. Sacred to the ancient druids and celts, its color symbolized the potent and darker power of the earth gods and goddesses. It was greatly associated with hecate, goddess of the occult and dark moon and crom dubh, god of the harvest. Countries such as switzerland, germany and austria used smoky quartz crucifixes to adorn bedroom walls as a guardian against bad luck and to keep evil energies and spirits at bay. In other cultures it was believed to help guide souls to the afterlife. It has been used in shamanic rituals and native american tribal ceremonies to enhance stability and provide protection from harmful forces.

It was also often found adorning the top of ritual wands and was prized by the cherokees. Brings spiritual balance and the integration of past lives and future into the present moment. Can be used as a tool for focused prayer. Helps to counter effects of radiation, sunburns & electromagnetic fields.

Suited well in the home when placed by the front door or a large window for protective vibrations. Connects to the sound of the universe including telepathic sounds. Believed to protect against pollution, radiation and electromagnetic smog.

Provides a vital shield against psychic attack, emotional, and environmental stress. Smoky quartz harmonizes with other grounding stones such as sugilite, black tourmaline, jet, and obsidian. When paired with amethyst, it promotes sobriety and clarity of thought as well as allowing one to clearly see their desires for what they truly are. Use smoky quartz with lapis lazuli, turquoise, or peridot to promote positive energy. To bring energies of transformation more fully into the physical realm, pair smoky quartz with moldavite.

Like all quartz crystals, smoky quartz is programmable and amplifies the powers of other stones. We, at crystal method1111, are not doctors and cannot give out medical advice.

Healing crystals should be used as a complement to other therapies and not as a replacement for medical treatment, diagnosis, or examination. For medical advice, please consult a licensed healthcare specialist. We at crystal method1111 have your best intentions at heart. We sincerely hope that each of our users has a positive and insightful experience with our products.

If you have any questions regarding the above, please do not hesitate to reach out to us.