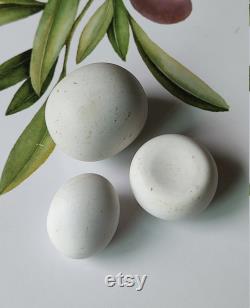 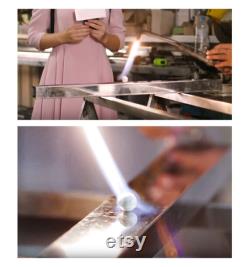 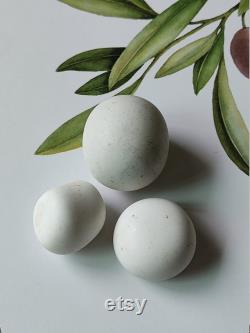 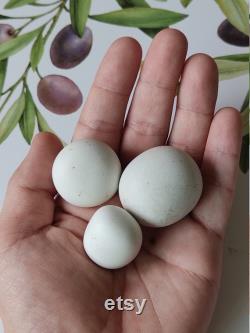 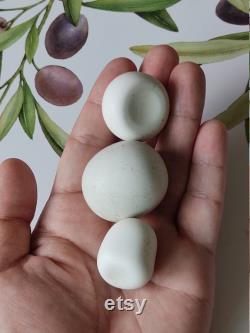 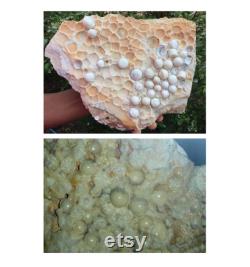 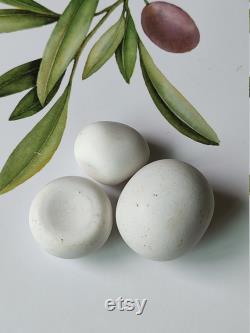 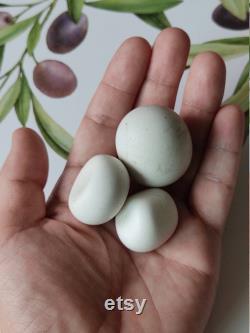 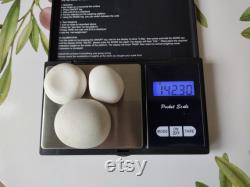 Dimensions per piece: average 21mm to 32mm diameter. We are happy to offer the phra pathom balls in beautiful "medicine bag" sized (in a trio) for its rightful owner to bring out for protection amulet and as good luck charms. These are especially powerful when they are worked with its owner. Found and naturally formed in the mountains of tibet, the chiang tung region of myanmar, the north of laos and in the deep caves of northern thailand. For centuries, these rare pearl-like mystical objects are revered and often kept by tibetan lamas and thai monks for their practise and meditation. These are often called "psychic elements" and are found deep in wet colder parts of caves, streams and rivers. The phra pathom balls are usually pearly off white (with some slightly markings of cream beige/ yellow/ brown depending on sample) with a matt shine and have a smooth texture to them.

And when magnified, you can see small pores on its surface. They are very heavy for its size (hence their extreme hardness and density), cold to the touch and are not perfect spheres with distinct markings on them. These psychic pearls are believed to be sacred stones and can disappear temporarily, become invisible and visible again at its own will and does not burn or melt in the fire or when subjected to a blow touch of over 1000c (see photo).

Being as hard as diamonds, they retain the metaphysical properties of these precious gems. It has been said that when one tries to cut it with a steel saw, the steel bit would completely blant before making a mark on the stone. We personally have not tried it due to its rarity.

They are also said to expand and contract in size as well. Its no surprise that they have been called various names in asia like white pearl of guam, white steel, eheeuah white, lekchai lek eheeuahe and cave egg stones. Scientific research & findings for identification as lonsdaleite.

We have made an important scientific connection from our extensive research that many believe that the phra pathom pearls are actually the rare element of lonsdaleite, an hexagonal diamond structure found in meteorites. We tested the hardness index of these pearls and find that they have a 7.5 to 9 mohs hardness on the various specimens that we have acquired (see last photo). And the phra pathom pearls also have the specific gravity (relative density) similar to that of lonsdaleite which is circa 3.49 to 3.55 gm/cc. These findings are consistent with the scientific data identity of lonsdaleite.

Note: as these are naturally found and formed, different elements may slightly differ in their test results and readings depending on its composition and purity of lonsdaleite found within each sample and specimen. Though they are expensive, we are not pricing them at usd$8,000 per gram, so you can own one at a bargain. Lonsdaleite (named in honour of kathleen lonsdale), also called hexagonal diamond in reference to the crystal structure, is an allotrope of carbon with a hexagonal lattice. In nature, it forms when meteorites containing graphite strike the earth. The great heat and stress of the impact transforms the graphite into diamond, but retains graphite's hexagonal crystal lattice. Lonsdaleite was first identified in 1967 from the canyon diablo meteorite, where it occurs as microscopic crystals associated with diamond. These psychic stones are wonderful to hold for meditation and healing work. When put around the house, they are considered to be very sacred sirimongkol or translated as protective, good luck charms and takes care of owner and his/her property.

We try to take photos as accurate as possible, but its beauty has to be appreciated with our own eyes. Please note that this listing is for 3 pieces of phra pathom "diamond" pearls.

We truly hope that you will find the best crystal for all the love, creativity and abundance in your life thank you. All contents, research and photos copyright chakra crystal store 2022.