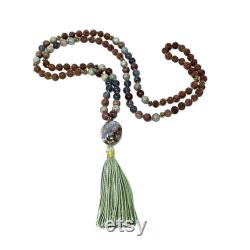 Representing the third eye chakra, iolite is considered a vision stone. It clears thought forms and helps you to express your true self, freeing you from the expectations of others.

The name iolite comes from ios, the greek word for violet. Iolite is commonly known as "water sapphire" in its deep blue sapphire color. The vikings made iolite's pleochroism a virtue by using thin slices of the stone as a light polarizer to navigate their trips. By observing the sky through iolites, the viking navigators were able to locate the exact position of the sun on overcast days. Iolite does what a polaroid does- it cancels out haze, mist, and clouds to make things appear clearer.

In fact, the stone has been called the viking's compass. Snakeskin jasper is used as a protective, calming stone to guard against all negativity, including the negative outlooks and behaviors of other people. It is also used to shield the wearer from psychic attack and also protects against harmful behavior. Known as the stone of grace, it can help its owner to move more gracefully.

It is also an anti-anxiety stone and can assist in times of worry or conflict. Crazy lace agate- found exclusively within the area known as chihuahua, in northern mexico, this lacy agate is known not only for its stunning banded patterns, but its powerful healing energies as well. Crazy lace agate is believed to have been created in the cretaceous period, about 65-90 million years ago.

Rudraksha - is a sanskrit compound word consisting of rudraand aka. Rudra is one of shiva's vedic names and aka means'teardrops'. Thus defined, the name means "lord rudra's teardrops". Green silk tassel: the color green represents abundance, renewal, growth and nature.

It is a harmonizing, balancing and calming color. Green is a healing color that gives healing energy to the heart.

These products are not intended to diagnose, treat, cure or prevent any disease. The results are the sole responsibility of the wearer. This item is made of 18k vermeil and snakeskin jasper, iolite, rudraksha, silk, lace agate.