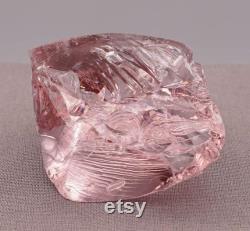 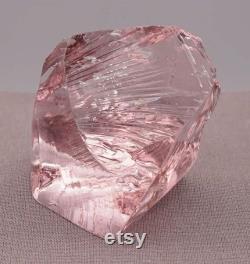 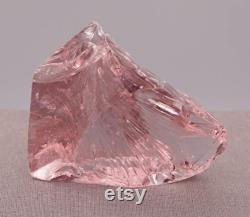 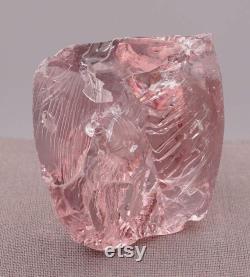 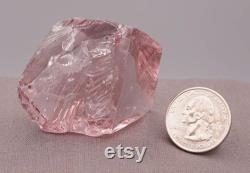 This color of monatomic andara crystal has chosen the name hgw pink. Hgw: the heart of god within. Hgw pink resonates at a higher heart octave, awakening the selfless, divine energy of the cosmic heart, freed from all judgments. This rare hgw pink andara comes from the andara experts mark and linda naea's collection.

A beautiful and true andara from lady nellie's land in the high sierra mountains of california/nevada. The first andara was discovered in february of 1967 on the northern california property of a choctaw medicine woman, lady nellie. Over the years, more andaras were discovered on her property, and lady nellie felt guided to share them with the world. Also found on the land is a powdery white substance called etherium, or prima matra, first matter.

It is this substance that distinguishes a true andara from the obsidian imitations. Andaras/etherium is monatomic energy, meaning, one atom.

The spin rate or frequency of monatomic atoms is very high and used throughout history to raise our vibratory state and expand consciousness. If an andara does not come from the land in northern california stewarded by lady nellie, or land void of etherium, then it is not a true andara. It is that there is always etherium (prima matra) present in genuine andara crystals. Etherium is a very rare combination of over 70 minerals that has a profound effect on our body and our subtle energy fields. The only available source of etherium in the world is found on nellie's land where the andaras are present. A true andara carries a very high vibration much different than any other stones or obsidian crystals currently being called andaras. True andaras work with your dna, greatly accelerating your perceptions by calibrating you mostly while you sleep, giving you lots of dreams. They work in your heart and they work wonderfully with your intentions.

Each monatomic andara crystal we offer in our shop is certified authentic, with resonant-scalar holo-dynamic lemurian codex encoding and enhanced light activation by andara crystal experts mark (m not mark) and linda naea. Lady nellie named them the ambassadors of andara crystals to the world.

The process creates a unique healing experience, individual for each person, assisting him or her in releasing unwanted energies while moving toward their next evolution of truth, and back to original divine consciousness. Since andara crystals were first discovered, many people working with them have experienced major shifts in their lives. A medical intuitive, in vancouver, wa, writes, the individual using the andara crystal is able to raise their own vibration to match, receive, and mediate the higher frequencies. Meditating with andaras, using gem elixirs made from them, carrying them, and working with them in other ways will help us to attune to them and increase our ability to use them as tools for healing and the science of exploring our consciousness.

Andara crystal is one of the master crystals, a healer and a powerful tool for (1) increasing awareness and vibration to access universal knowledge; (2) cleaning and balancing chakras; (3) activates one's energy-channeling ability; (4) accelerates the spiritual development process, and (5) aids a person to manifest the life s/he chooses. Along with extraordinary beauty, the andara crystal is reported to offer energetic benefits, healing qualities, and protective attributes.

It is also said to enhance communication between nature and the owner of the crystal. The metaphysics of monatomic andara crystal. The monatomic andara crystal was originally found by a half-choctaw indian woman by the name of nellie, a medicine woman, and shaman. Being a shaman and healer she immediately knew it had powerful healing properties. Her intuition was quickly borne out when various healings and other paranormal events started taking place. Maia a batch of the andara crystal, and she too had some rather profound spiritual experiences with it.

This is the source translation of akashic record reading of tehuti/thoth by rev. Tehuti andara is the name we have chosen to give to these crystals. They are composed primarily of prima matra (sacred matter) heated to very high temperatures. Those we call the timewalker, who worked in conjunction with the high devas myth logically depicted as unicorns, originally seeded the land for the formation of this prima matra.

When the implosion occurred the seed' material was heated not only to very high levels but also in a contained hyper-field which is created by two dimensions touching. A hyper-field form a no-time zone where linear laws of thermodynamics are warped or in some cases do not apply at all. It was within such a hyper-field that the prima matra powders and the andara crystals were originally created. Tehuti approximately 2,000 years after the inter-dimensional implosion had occurred, a lemurian temple complex was raised on this site.

The name of this temple was andara' meaning light of beauty and perfection. The primary purpose of this complex was in working with the prima matra powders, crystals, and water of the land.

By this we mean that through their purposeful interaction with the prima matra they effectively transmuted their crystalline dna, therefore becoming a highly futurized form of hue-man being, even more, developed in the light matrix than the lemurians of that age. Thus, we will cease calling these colonists lemurians and refer to them as andareans. Tehuti now we focus on the subject of the andara crystals. While they resemble a crystalline lava-glass and while certain similarities are present between lava-glasssuch as obsidian and these crystals, they are vastly different energetically. Natural lava-glass could only be seen energetically as a distant cousin of andara crystals.

Lava-glass is created from volcanic activity deep in the earth, with the material coming to the surface in an eruption and being exposed to specific conditions as it cools. Because these lava-glass minerals come from deep inside the earth within chambers containing great heat, they do contain various levels of prima matra.

Andara crystals are even rarer than the prima matra lava-glass, in that they were formed inside a no-time hyper-field, creating within them a kinsothemitic continuum. This continuum allows a moving time field within the elemental and structural composition of the crystal formation.

In essence, this k' continuum does not align with natural polarity. Instead, it phase-matches directly with the universal light matrix or the golden net' of athena. Note: athena's net is the geometric space-time continuum, a. Being heliocentric, the monatomic andara crystal tends to draw the individual's consciousness into the center of the energy spiral within when they gaze into the crystal, thus bringing that person's consciousness into more intimate contact with the andarean consciousness. Monatomic andara crystal also creates a double vortex, in other words, they have zero-point energy and they have super-conductive monatomic energy.