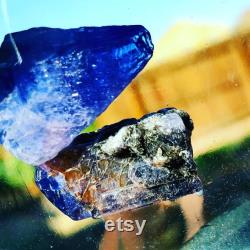 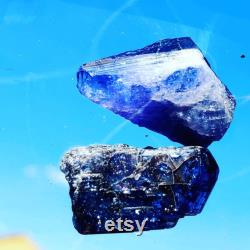 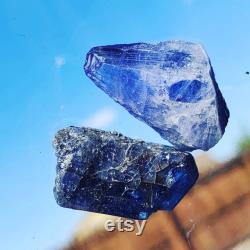 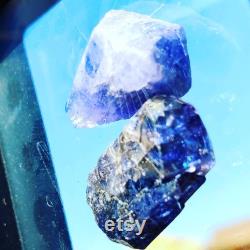 This 2 piece parcel of beautiful tanzanite is great to have beautiful sized 2 pieces are both super nice pieces that we have for sale beautiful parcel totalling 34.4 carats of tanzanite. Gunna be unloading a bunch of tanzanite this upcoming week get it while it's hot this parcel 34.4 carat tanzanite was listed for $360, lowered to $150 until nye. Price cut of 50% get this beauty now while the sale is going down.

Read description for information on tanzanite including the export ban and metaphysical properties. Tanzanite is the blue and violet variety of the mineral zoisite, caused by small amounts of vanadium. Tanzanite belongs to the epidote mineral group. Tanzanite is only found in tanzania, in a very small mining area near the mererani hills. Tilt tanzanite and you'll see two-three distinct colors in three crystal directions; this is called dichroic or pleochroism.

The tanzanian government recently passed a law, as an extension of the mining act, banning the export of rough tanzanite. The government hopes this will increase investment at home in cutting and polishing and bring back more revenue to the gemstone's home country.

Until the law was passed, the vast majority of tanzanite was exported rough to countries such as india, where the processing was done. These processing countries earned most of the revenue from the sale of tanzanite, whilst tanzania earned only a small percentage. The government hopes the ban will encourage the growth of processing facilities in east africa and also give a boost to miners. Mining provides direct employment for around 14,000 workers in tanzania at present.

Tanzanite stimulates the throat chakra, third-eye chakra, and crown chakra. It activates our psychic abilities and vibratory rate, facilitating communication with the higher spiritual dimensions. Tanzanite is a stone of transformation that can help dissolve old patterns of disease and karma.

It enables us to move forward with optimism and inspiration, giving us a sense of direction and allowing us to manifest our powers for the highest good. Tanzanite enhances healing at all levels, as well as protecting.