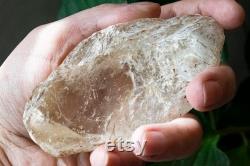 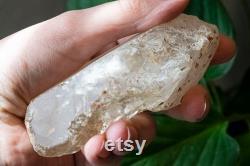 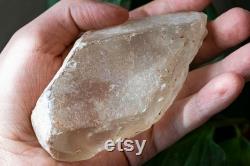 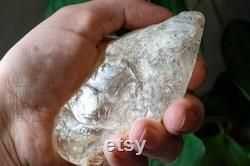 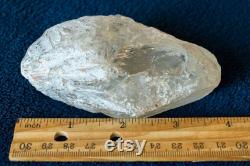 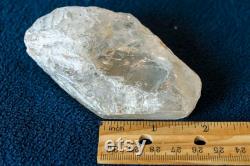 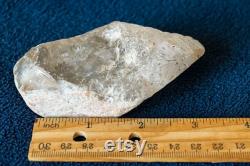 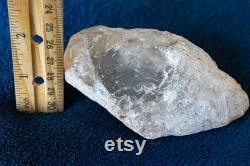 Colorless quartz crystal piece for healing and/or decor. Height: 2 inches at highest point. Depth: 2 inches at thickest point. Quartz crystals (especially colorless) are some of the most common and therefore best-known in the world for their many properties and healing abilities which have been studied extensively.

Quartz can be found world-wide and have been used since ancient times for different purposes. Did you know that quartz crystal carved into human skull shapes have been found in the ruins of ancient civilizations such as the mayans stone human skull shaped carvings are a fascinating side topic in themselves-there is so much legend, superstition, and healing they are believed to possess but that, as mentioned, is a separate topic and the piece pictured here is a crystal bed not a skull, so let's stick to the healing properties of regular quartz. Quartz is considered a master healing stone because it can affect and potentially heal both the physical and the ethereal bodies-including issues with any of the chakra energy centers. Because quartz can assist healing any and all the chakras i'll go ahead and give you an overview of each one below. The root chakra is the first chakra to develop (birth to age 7) and affects one's most basic instincts as well as one's ability to manifest thoughts and ideas into this physical dimension.

This chakra has a red color and vibrates at a denser, slower rate than any other chakra of the main body centers. Blockages/weakness/over-activity of the root/base chakra may manifest the following symptoms. Feeling the need to constantly move homes and feeling difficulty setting down roots anywhere permanently. Disorganized life/home-and not because one doesn't have the time and/or is too lazy to clean/organize. Experiences issues with feet, knees, blood, bones often.

I also wanted to put it out there that if one is having issues with the root/base chakra they don't necessarily need quartz or another stone to fix such issues. Nature and connecting to nature are excellent and cost-free ways of correcting imbalances in this chakra. The simplest way is to take your shoes off and stand on the raw earth for a few minutes. Centers in the bottoms of your feet which will pull energy right up from the earth and into your chakras and body.

Also, just sitting under a live tree that has roots into the earth or hugging a tree will have the same effect. If for some reason you cannot get access to such a place or the raw earth-that is when i suggest using something like quartz or bloodstone because all stones (the ones that come from the earth-not meteor stones) are earth and therefore have a piece of that energy signature imprinted in them.

The sacral chakra is located above the root chakra on the body. Whereas the root chakra is about stability, planning and developing one's relationship with themselves, the sacral or second chakra is. About managing flow in life such as the flow of emotions and learning how to connect to others. The sacral chakra may not be in balance if one experiences the following symptoms. Hip and joint issues i can speak from experience on this one issues related to hip joints in particular and having to go through the healing process for it are. A large factor which led me to start this shop. Resistance and fear of change. The solar plexus chakra is basically an energy center where our gut is.

It develops later in life than the 2 chakras that sit below it-from 15 to 21 years old. This chakra deals with one's confidence, motivation, ego, identity and personal power.

It is also a chakra that governs decision-making. One may have an imbalanced solar plexus chakra if they have the following symptoms. Bullying (if you are the one exhibiting this behavior not the victim of it). Cancers of the digestive organs.

I cannot promise that garnet will cure something like cancer, but the stone should be useful to assist healing and balancing. The heart chakra is an energy center located in the center of the chest. It governs the heart, lungs, diaphragm and the arms/hands. It is green in color and its energy vibrates more quickly than the chakras that sit below it.

This chakra is quite important because it is basically the bridge between your upper and lower chakras. If this chakra has issues it can be a real problem because it will throw off the balance between the other chakras-three of which govern the more spiritual (chakras above the heart chakra) and three lower chakras that govern the physical.

This chakra develops most from the ages of 22-28. As one can guess this chakra is all about such things as love, self-love, finding commonalities and bringing things/people together. The heart chakra is basically one of the. That is why people often feel conflicted between what their actual mind, gut and what they feel in their heart, are telling them.

When this chakra is not in balance either because it has become weakened, blocked, or over-active one may experience the following symptoms. Issues with the physical heart. Constantly feeling lonely or antisocial. Feeling the need to always put others first at one's own expense at times.

Cancers of the breast or lungs. The throat chakra as one can imagine is located around the throat area of the body.

This chakra is a blue color, and its vibration is one of the faster ones as compared to the lower chakra energy centers. This chakra develops from approximately age 29-35, so one of the later developing chakra centers.

The throat chakra affects the throat area but also up into the ears as well. People with a well-developed throat chakra. Tend to be both good speakers and listeners.

This chakra center can easily get blocked or weakened because many people are in a constant battle between telling and expressing their authentic truth and working within what is both culturally and socially acceptable ways of expressing one's-self. Such things as holding one's tongue as to not offend someone, sugar-coating the truth, outright lying, keeping toxic secrets and overall not living in one's truth i. Trying to be someone you are not are all ways this chakra can develop problems. People with a blocked or weakened throat chakra may develop problems with their throat and voice. They also may cough often for what appears to be no reason. When this chakra has issues, the following other problems can develop. Feeling that one has to constantly speak loudly and be heard.

The brow chakra is also known as "the third eye " as it is believed to be located where this sixth sense sits in the body. Governing from between the brows up into the top of the head. This chakra is an indigo (purplish-blue) and vibrates fairly quickly as it is the last chakra that is attached to a point in the physical body. The brow chakra expands naturally from the ages of 36-42.

It is common for people that experience this to suddenly feel like. Outer worldly accomplishments (materialistic pursuits) do not give one's life meaning as they once did. Often times people will begin to pursue knowledge and explore the universe within and what possibilities it holds. Some people may choose to pursue a religion or study religions extensively in search of answers to questions they previously could not answer such as the meaning of life. It is often a time of profound expansion in one's. This chakra has a particularly interesting function because it is the one place in the physical body where the illusion of duality is dissolved, and the connection of all things can be at least partially observed. This energy center is where both masculine and feminine energies come together and flow through within a person.

This energy center can become blocked or weakened because we live in a physical reality where most of what we put our attention towards and pursue is physical in nature-neglecting our spiritual, non-physical side. Many people's psychic abilities and brow chakras are weak and under-developed because there is little focus.

On these areas in one's every-day life. This is not always the case however, for some people this chakra can become over stimulated. This can happen when people indulge in mind-altering substances too much. The following are possible symptoms of a blocked/weakened or over-active brow chakra center.

Not having a strong intuition/self-trust. Sinus issues/congestion (if not allergic to anything).

The crown chakra is located at a point above the top of the head. This chakra is purple to whiteish-clear in color and vibrates the most rapidly of any of the chakra points. This chakra is unlike any other chakra it does not govern a physical part of the body.

Through this chakra there is no duality, and this chakra isn't about the physical and it's different aspects a sharp contrast to the root/base chakra for example which is all about trying to manifest into the physical and be connected to it. The crown chakra naturally expands between the ages of 42 and 49 but is difficult to completely open-if one can manage to open it completely, it is said they will gain "knowing of all things" including the divine. Interestingly, it is believed by some that when one does, the soul leaves through this chakra center.

If this chakra is either blocked, weakened or over-active one may experience the following symptoms. Apathy towards others and life.

An imbalance in this chakra can be quite detrimental as one can see. I tried to provide a "brief" overview of the different chakras but that proved to be more difficult than expected because truth-be-told they all do so much and can greatly affect a person if there are imbalances/blockages in them.

As you can surmise, quartz can assist with any of the chakra-related issues mentioned and additionally if you use stones that are especially good for a certain chakra or issue, quartz will amplify the energy from that stone and assist healing/balancing. I must also point out the amazing protective qualities of quartz any kind of quartz will be highly protective to a person's energy and personal space such as one's home or wherever they spend their time if the quartz is placed there. That is why a piece like this is particularly useful-it has many small points that will focus the protective properties and basically shoot them out like little lasers in different directions. This will help for example if one is at their place of work, and they can have a piece at their desk-it will help deter "energy vampires"(people or devices like computers), gossiping coworkers (that may include yourself if you are typically easily caught up in gossip) and any other types of low-vibrational activities from occurring in one's space. The flip side of this however, is clear quartz especially will more forcefully push your personal frequency higher and you may find that over time you just absolutely cannot engage in lower frequency activities such as gossiping with your coworkers about others.

You may also find other life-changes start to take place. If you are drawn to this piece, it may be time on some level that you may not even consciously realize yet. You will receive the exact stone pictured.

This item is made of quartz crystal piece.