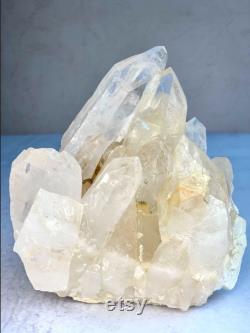 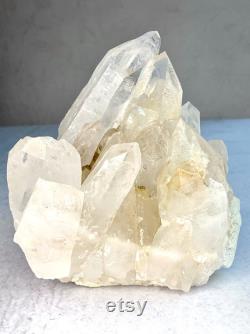 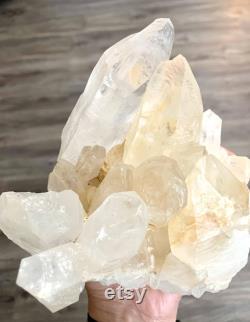 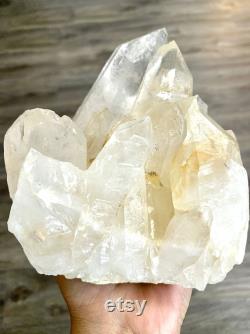 This is a huge free-standing cluster direct from india. This exclusive cluster is quite the statement piece. Himalayan quartz helps to establish a strong, clear connection to higher guidance. These stones carry the vibration of the shamanic healers who have lived in the himalayan mountain regions for centuries.

Rather than receiving programming these crystals are teachers. Their extraordinary vibration stimulates the third eye chakra to enhance psychic visionary ability which enables the knowledge of healing lore within these crystals to be accessed. Their energy helps us to better understand the information they impart and use it to carry out healing. Clear quartz encourages clarity of thought and purpose to one's heart and mind. It works on all levels of the energetic and physical bodies and resonates with all chakras.

Clear quartz will amplify any energy with which it moves into resonance, including other stones, constantly broadcasting that energy into the earths electromagnetic field. Clear quartz has been used as a healing tool since the ancient times. In shamanic practices it is referred to as the light-stone, an instrument of clairvoyance.

Clear quartz was traditionally used by australian aborigines and the prairie indians of north america as a talisman for visionary work. The navajo believed it to be clear quartz that first caused the sun to cast its light upon the world. The six sided hexagonal shape of quartz crystal points allow them to hold a programme or intention, to magnify that energy and radiate it out into the surrounding area. This item is made of himalayan quartz and clear quartz.