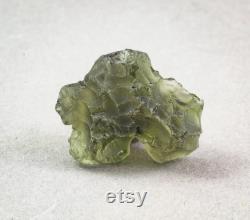 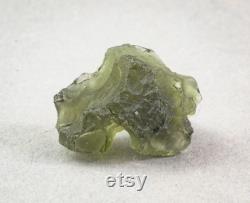 Etched by force and flame as it fell from the heavens moldavite returned to the earth's surface transformed, a glass of amazing delicacy and grace ready to serve humankind. As a stone of connectivity, moldavite carries an intense frequency, a fusion of earthly and extraterrestrial energies that are quickly felt, often dramatically in those who resonate with its power. Holding moldavite for the first time often produces a sensation of heat, felt first in the hand, then progressively throughout the body.

In some cases the heart chakra is activated, experienced as a pounding pulse, followed by sweating or flushing of the face, and an emotional release that may range from laughter to tears. Moldavite's frequency may take some getting used to, but its profound ability to accelerate one's personal and spiritual evolution makes it highly sought after in the metaphysical world, both for its life-altering capabilities and as a catalyst for drawing in light to aid in earth's healing. Moldavite is a member of the tektite group of natural glasses formed from interplanetary collisions. From the greek word tektos, meaning molten, tektites are glassy mixtures of silicon dioxide, aluminum oxide and other metal oxides with an amorphous crystal structure. Unlike other tektites from around the world which are tar black or brownish-black, translucent moldavite is a deep forest green and is the only variety suitable for cutting and faceting as a gem. This beautiful stone is rare, found only in czech republic, and is named for the area in which it is found, near the moldau river (called the vltava in czech). While scientists differ in theories regarding moldavite's origin, nearly all agree its formation coincides with the crash of a large meteorite approximately 14.8 million years ago in what is now the bohemian plateau. The rock metamorphosed by the heat of impact created a strew field of moldavite in the two, mostly rural, areas of bohemia and moravia. Farmers often turned up the stones when plowing their fields, while other specimens worked their way to the surface after spring thaw or heavy rains in the fall. More recently collectors have mined for gem grade and museum quality specimens by sifting and digging through loose sands and gravels.

The shapes of moldavite give witness to its molten origins, most commonly drop-like (round to very flattened), plate or disc shaped, oval, spheroid, dumbbell shaped, elliptical, rod-like or spiral, all common in splash patterns of liquids. Moldavites from bohemian localities are more drop-like, elongated or rod-like, while moravian stones are more spherical. Moldavite occurs most often in shades of deep forest green, though some are pale green or olive, and others, especially from moravia, are greenish-brown. The most magnificent of moldavite's features is the beautifully etched, carved, wrinkled or sculpted patterns inherent in raw and unpolished stones.

Pieces found at or near the surface have been subjected to erosion in streams and rivers over the millennia and resemble the rough exterior common to river stones. More finely textured and sculpted specimens are found in sand or gravel pits, and ones found intact and unmarred are considered museum grade and are rare and valuable. The rarest of all (less than one percent) are the sonorous moldavites, called angel chimes, which are tempered naturally and if dropped on a glass or metal surface rings like a coin.

Moldavite has a rich history, prized since the stone age and used not only for arrowheads and cutting tools, but as a spiritual talisman and amulet of good fortune, fertility and protection. It was found in the archeological site of the venus of willendorf, the oldest known goddess statue, and has been linked to legends of the holy grail, thought to be an emerald that fell from the sky out of lucifer's crown before he was cast from heaven. In czech lore, it was given as a betrothal gift to bring harmony to marital relations, and for centuries has been used in jewelry, religious items and for spiritual transformation. Moldavite is good for connecting us with the wonders of the universe. Carrying or wearing moldavite in jewelry allows its energies to remain in one's vibrational field throughout the day strengthening its effects and increasing the incidents of beneficial synchronicities in daily life.

Because of moldavite's intense vibration, some may experience light-headedness or a lack of grounding and may need to acclimate themselves gradually to wearing it. Moldavite is a useful stone for star children and sensitive souls who find it difficult being in incarnation on the earth, and who cannot adjust to suffering and deep emotions. Placed on the heart, moldavite uncovers the reasons and purpose for why one is here, and eases the homesickness for those whose origin is not earth.

Moldavite works extremely well in combination with other stones, particularly with the crystalline energies of quartz varieties. It is one of the synergy twelve stones, and is ideal for use in making energy tools.

Add to wands, headbands, templates, grids and other devices to intensify their effects. Moldavite is a powerful aid for meditation and dream-work, as well as increasing one's sensitivity to guidance, intuition and telepathy, and the ability to understand messages sent from higher realms. Measurements: 2.0cms 1.0cms 1.2cms. Thank you for viewing this item. The cosmic (heart) gateway frequency is also known as the third heart of creation.

A fully open heart chakra is the perfect transducer of divine energy, perfectly balancing the yin / yang energies and flooding the body with empowering divine light and unconditional love. All of our stones are prepared with the upmost love and care by our practitioners and we hope you enjoy them. We have a bunch of brand new crystals for sale with tons of cool new stuff and unique rare items for astute collectors, crystal enthusiasts, zen masters, occultists, witches, shamans, healers & mysticsyou name it. This item is made of moldavite and besednice.